The first week of October 2019, which happens to be my Birthday as well, I got an opportunity to attend Grace Hoppers Conference.

Being in there with 26,000 other women in tech at the same place was thrilling, overwhelming and quite tiring at the same time. I say tiring because of the 2 hours wait in the long queues just to pick up a paper-badge and later for Keynotes, regular sessions, food, even to get a picture with the great GHC signboard. Waking up at 5 am and going to the convention center to pick my badge is a story for another day..

About Grace Hoppers Celebration (GHC) – It’s the world’s largest gathering of Women and other underrepresented groups in Computing / Technology. This year they had a massive 26 thousand amazing and lively group of individuals attending GHC. I got to know about the conference when I was pursuing my Bachelors, GHC-India version of it which of course happens in India every year. I was selected as a Student Scholar for GHC-India. Honestly, I always wanted to be a part of GHC and meet like-minded people sharing different yet similar challenges to be a part of Technology.

The conference kickstarted with inspiring Keynote sessions and awards. This year’s GHC theme was “We will..” and you could fill in your own interpretation in what ways the statement could be filled.

One of the topics of discussion I really liked was igniting the genius in every child using technology to bring the best quality education to communities around the world, especially the most underserved.

When this video was previewed at GHC keynote, It quite literally gave me goosebumps seeing high school kids talking about what solutions they wish to build via technology. I was pondering on the very insistence by society and all the hype about “Growing up” and doing wonders while we could still do wonders without growing up.

Unfortunately, all the sessions of GHC are not recorded. There were sessions that were happening in parallel, equally interesting and then you have to make this choice of just watching either of them. It’s a pain but that’s how it is. Well, you can still watch some of the keynotes here, which is great!

One of my favorite keynote session amongst the many was by Dr. Fei Fei Lee where she talked about the remarks she received from her admiring colleagues about her idea about image-net, Now, it has a key contribution towards Deep Learning revolution and foundation for the way Machine Learning projects are developed.  She said “It is okay to feel small but together we can be big enough to accomplish anything” and it takes conviction to find your circle.

One unexpected performance which gave everyone chills was themed as how women in tech we have been told false narrative who we are and what we can do. Together we will flip the script and change the status quo. It was uber cool and inspiring to watch this performance. Few snapshots below.

I was looking forward to the keynote by Aicha Evans. She was one of my most admired women in tech in a leadership role. She talked about her vision and necessity for Autonomous Mobility. She concluded by mentioning the famous proverb.

It’s always a good feeling to meet Outreachy people, I met one of a former Outreachy Intern, we both interned during the same round under the same org, Debian.

It was lovely meeting one of #outreachy alum under Debian and a friend @siamezzze at #GHC19. @outreachy #debian #debianoutreach pic.twitter.com/gEs6TC0DKE

Intel’s been a proud supporter for GHC for years and has a strong presence at GHC. 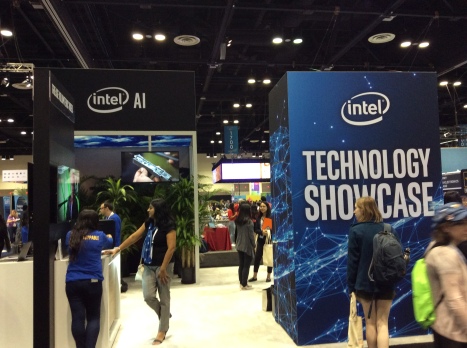 Intel is committed to advancing the uses of AI that most positively impact the world. The hardware, software, and algorithms that we create and utilize on a daily basis can help identify children at risk of exploitation, improve medical diagnosis, and protect our natural resources. Intel is passionate about equalizing AI resources, capabilities, and services to benefit all. Source – AI4Good

Few products we put out there as a part of Technology Showcase at GHC:-

At the end of it, attending GHC was truly an extraordinary experience. I felt grateful to be a part of the celebration. Thanks to my employer – Intel and Intel’s team for the opportunity.